With Offensive Line Ailing, Should Peyton Manning Even Play Tonight? 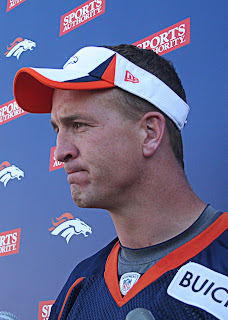 For the starters, preseason games are meaningless.

Sure, preseason matches allow you to fine tune things and get on the same page with your new quarterback (here's looking at you, Wes Welker), but in Week 1, the starters only play the first quarter—if that.

So with Denver's offensive line banged up, should the Broncos even risk playing quarterback Peyton Manning tonight against the San Francisco 49ers?  The last thing Denver's staff wants to see is San Francisco's Aldon Smith blindsiding their $17.5 million quarterback in a meaningless exhibition game.

It's a subject up for debate, but the fact is, Manning may have to play with this patch-work offensive line during the regular season if any of the o-linemen have reoccurring injuries.  The time is now for Manning to get on the same page with his line.

"Certainly, you think about it because you’ve got good offensive players, so if they’re injured and not in there, then it does make an impact on your team,"  Manning said after practice on Tuesday when asked if he was concerned about the injuries suffered along Denver's offensive line this summer.

It's hard to disagree with Manning on this one.  This may be the same offensive line he ends up playing behind this fall.

With that said, it would be wise of the team to limit Manning's reps in Week 1.  In a game that counts for nothing, there's no reason to have Manning in for more than one successful series and risk injury.

On Tuesday, head coach John Fox said the starters will be prepared to play the entire first quarter.  "Sometimes it will go less than that, but it won’t go any more than that," said Fox.

It wouldn't be surprising to see the first-team offense stay in the game a little longer than Manning, with Brock Osweiler getting some reps with the 1's.  That's something Manning said the team would discuss on Wednesday night.

"I don’t know how long we’re going to play—we haven’t had that conversation yet.  I imagine probably sometime tomorrow, tomorrow night we will have that conversation of what the whole preseason plan is," Manning said on Tuesday afternoon.

The Broncos will take on the 49ers tonight at 7 p.m. MT on KTVD.