The Denver Broncos were back on the practice field on Tuesday for their final full-padded practice before traveling to San Francisco for their Week 1 preseason match up against the 49ers on Thursday.

The offensive line was shuffled around and the offense as a whole rebounded after a poor team showing on Monday.  Notes and quotes below.

Offensive tackles Orlando Franklin (hip) and Ryan Clady (shoulder) were both present, while Clady was limited and Franklin participated only in walk-through sessions with the offensive line.

The Broncos on Tuesday also signed free-agent tight end Deangelo Peterson, who spent time on the Washington Redskins' practice squad last season.  Peterson will help provide depth at a tight end position that has been hit heavily with injuries this summer. 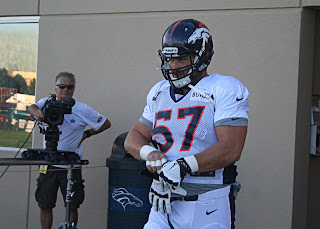 With Clady limited in practice and Franklin sitting out, Denver has been moving around offensive linemen.

Chris Clark, who had been filling in for Clady at left tackle, moved over to right tackle (replacing Franklin), with Zane Beadles lining up at left tackle.  In Beadles' place at left guard was Ryan Lilja, with Manny Ramirez at center and Louis Vasquez at right guard.

"You need flexibility (on the offensive line) to make it through a whole season," Fox said after practice, adding that the linemen having been moving around throughout camp.

On game days, the Broncos usually carry seven offensive linemen—five starters and two reserve linemen that will have to be able to move around when called upon.  Moving around players now will help the team prepare for potential mid-season injuries on the line.

Second-year cornerback Omar Bolden is fighting to even see the field on defense this season (he will as a special team's player).  Bolden's performance on Tuesday helped his case.

The early morning dew left on the grass at Dove Valley today caused some of the receivers to lose traction, and Bolden used that to his advantage.  At one point during one-on-one receiver vs. cornerback drills, Bolden twice knocked around Wes Welker, causing him to lose his footing.  No flags were thrown on either occasion.

Later in practice during a two minute drill, Bolden broke up a Peyton Manning pass.  On a day when the offense showed progress, Bolden was a bright spot on defense. 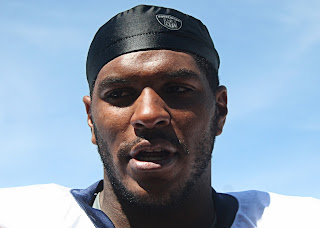 Thomas, who is getting extensive reps with Dreessen and Tamme sidelined, came up big on Tuesday, catching a touchdown pass during red zone drills and later coming through during the first-team's two minute drill.

During their two minute drill, simulating a game situation in which the offense was trailing 24-20 with 1:40 to go, Thomas moved around from playing tight end on the line to going out to line up as a receiver.

After Manning's first down pass was batted down at the line of scrimmage by defensive end Derek Wolfe and his second pass was broken up by Bolden, the veteran QB turned to Thomas on 3rd-and-10.

Thomas hauled in the pass eleven yards down the field and Denver's drive stayed alive.  A few plays later, Demaryius Thomas caught a touchdown pass, simulating a go-ahead score for the offense.

The first-team's two minute drill was a success thanks to Thomas' drive-saving third down catch.

"Julius has gotten great work this training camp," said Manning, who noted that both Thomas and Virgil Green have stepped up with Dreessen and Tamme sidelined.  "Julius (has been) getting a lot of work in there with the first group.  It’s a great situation for him."

As noted above, Manning led a successful two-minute drill today after having a poor day on Monday, as did the offense as a whole.  Second-year quarterback Brock Osweiler also led the team down the field during a two-minute drill, capping off the drive with a one-yard Jacob Hester touchdown run.

Today, the offense looked smoother and ready for live action.

"There is good familiarity between the Broncos offense and the Broncos defense.  So to go against another team, a great team like the 49ers, will be a great test for us," noted Manning.

Miscellaneous notes:  Fox said after practice that the starters will be "ready" to play the entire first quarter in San Francisco, but added that they may not stay in that long...  Manning said the team has not yet decided how long he will play on Thursday... offensive guard Chris Kuper seems to be rehabbing well—he was actively moving around on the far practice field this morning... watch for more quotes from both Manning and Fox coming tomorrow morning and on Thursday.
This post is sponsored by TiqIQ.  Find the best deals on NFL tickets at TiqIQ.com!