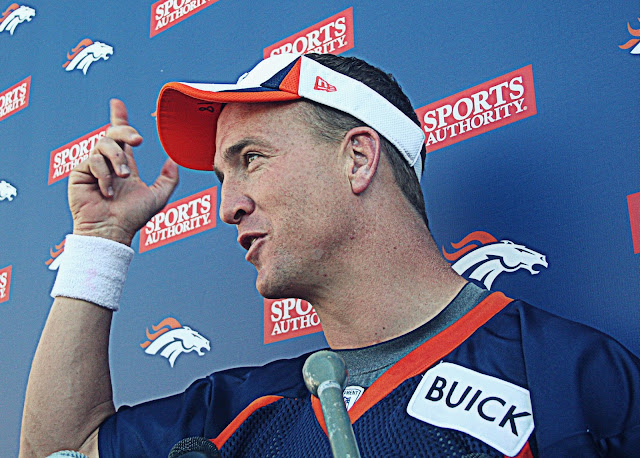 You know those movies where a character goes to meet somebody and has a mic in their ear with somebody else telling them what to do and say?  That's what Denver Broncos quarterback Peyton Manning feels like on Sunday afternoons.

"You see in the movies all the time, when somebody is wired and they’re telling them what to say on their first date and you see those awkward moments. So sometimes [offensive coordinator Adam Gase will] call a play, then I’ll be calling the play and then he’s saying something else," Manning said after practice on Tuesday when asked about having a voice in his helmet.

Manning said the biggest problems arise when he is trying to say something to his teammates in the huddle and Gase is trying to talk over him in his helmet.  But with time, the two will learn to not talk over each other.

"I think Adam and I will get that feel for each other.  The thing I like about Adam is that he’s very decisive. His goal, as we’ve talked about, is to get the play in as soon as possible." 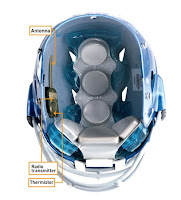 Offensive coordinators can talk to their quarterbacks through a wired system that allows team's to call the play without the quarterback having to come over to the sideline to hear it.  But the mic is only to be used for calling plays—coaches cannot talk to players during live plays.

"I remember my rookie year.  I used to think, ‘Boy that could be great.  They can tell you when you’re about to be killed in the back and you can get down.  Or they could tell you, 'Hey, he’s open! Throw it down field.' But they cut that thing [with] 15 seconds (left on the play clock).  So there is kind of a sense of urgency when the runner is tackled, [Gase is] trying to get the next play in to you (quickly)."

Trouble arises when Gase is talking over him, and Gase cannot tell Peyton when he is about to be blindsided.  But there are unorthodox ways Manning can use being wired to his advantage.

After practice on Tuesday, Manning told the Denver Post's Mark Kiszla a secret about his helmet speaker.

Manning to me: "There's always enough static in helmet speaker if I don't really like play I can pretend volume cut out and change it."
— Mark Kiszla (@markkiszla) August 6, 2013

Manning recounted a story to Kiszla from his time with the Indianapolis Colts when he didn't like a particular play call and changed it in the huddle.  Manning's audible failed and when he got back to the sideline, his coach was understandably upset.

Manning explained (lied) to his coach that his helmet speaker went on the fritz, per Kiszla.

Hopefully Manning won't ever have to use such tactics in response to Gase's play-calling this season.  We will be a little suspicious though now every time we see Manning covering up his ear holes to hear an alleged miscommunicated play call.

Your secret's out now, Peyton.