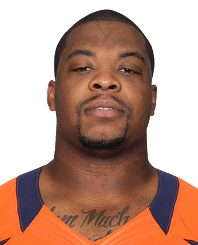 Guarantee is used in quotation marks because Pot Roast alleges that his quotes were taken out of context. Here's what he told the Denver Post's Mark Kiszla:

It seems that Knighton inadvertently replaced "our goal is" with "we are" going to win the Super Bowl. Judging from Knighton's follow-up tweet on Monday, that's likely the case:

I didn't guarantee a super bowl win. I just said I don't give a f**k who we play. We as a team have one goal. Being super bowl champs.
— Terrance Knighton (@MrKnighton2u) December 15, 2014

Regardless of if it was a guarantee or simply a stated goal, Knighton's words created a firestorm.

"My dad always told me, 'Well done is better than well said,'" Brady said in his weekly radio interview on Westwood One, via ESPN. "In the meantime, we have a lot of football left to play . . . there's still two very important games remaining on our schedule, and that's what my focus is on."

"Pot Roast is a big man, so I would never say anything that would get him mad at me. But I will just say there is a lot of football left to be played. [Denver will] have their chance and we'll have our chance, and we will do our talking on the field."

Though Denver got the best of Brady in last year's playoffs, the Patriots thumped Denver in New England 43-21 in November. Currently the No. 1 and No. 2 seeds in the AFC Playoff race, the Patriots and Broncos are the favorites to meet again in this year's AFC title game.

But, as Brady said, there's a lot of football left to be played between now and then. Anything can happen.