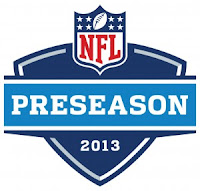 The Denver Broncos will take on the San Francisco 49ers at 7 p.m. (MT) tonight on  KTVD Channel 5 (20).  Out of town fans can watch the game on NFL.com's Preseason Live package.

KTVD's Kevin Burkhardt (play-by-play) and John Lynch (color commentary) will be calling the game and Rod Macke will be reporting on the sidelines at Candlestick Park.

Last season, the Broncos finished 13-3 in regular season play while the 49ers went 11-4-1.  Denver's season ended when they fell to the Ravens in the divisional round of the playoffs. Three weeks later, San Francisco fell to the same Ravens in the Super Bowl.

Entering the 2013 season, the Broncos and 49ers are considered among the top teams in the NFL.  Tonight's game—or at least the first half—could be a preview of this season's Super Bowl.

Follow along live after the jump with some of our favorite game day Tweeters: