According to his Twitter profile, Jeff Barnd is a "FOX 45 News Anchor #Baltimore Loves current events, politics and has an aversion to twitchy bug parts when you step on them."

Barnd also appears to a fan of professional football, or at least the Ravens.  On Thursday afternoon, Barnd sent out the following tweet: 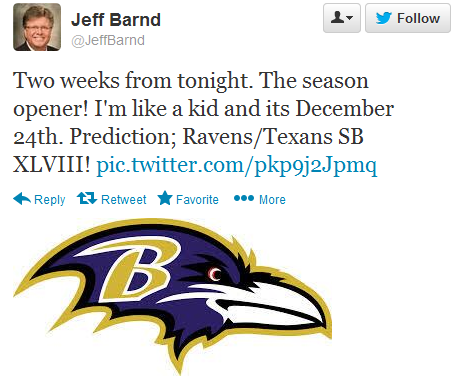 At the time of this writing, Barnd's tweet is still live, but he'll probably want to take it down soon.

The Baltimore Ravens and Houston Texans, of course, both play in the American Football Conference (AFC).  That means there's no way they would ever face off in the Super Bowl.

The NFC champion and AFC champion from each conference duke it out in the Super Bowl each year.  View some of the best Twitter response to Barnd's tweet after the jump.

@JonHeathNFL In other news, the NFL will now allow two AFC teams to play in the SB....
— Caleb Mckenney (@skinnyguysports) August 22, 2013

@JeffBarnd I will give you a million dollars if your prediction is right. #texansareintheafctoo
— Ryan M (@RynoND) August 22, 2013

Maybe @JeffBarnd has some insight on either the Texans or the Ravens moving to the NFC that we don't know about
— #DTB12 (@DouchyTomBrady) August 22, 2013