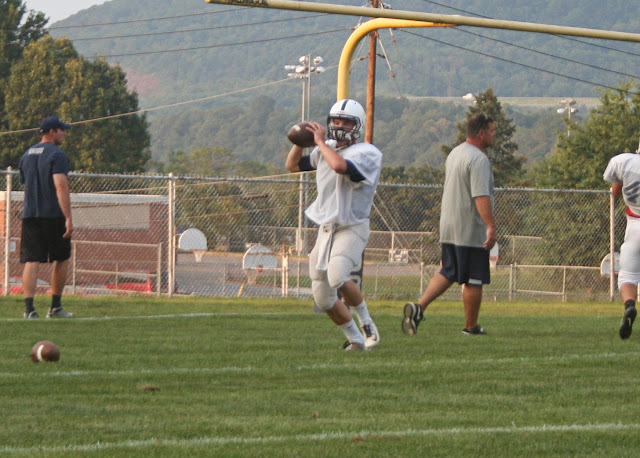 The Buffaloes will be without their starting senior quarterback to start the 2013 season.

During a home scrimmage against Camp Hill on Thursday evening, Newport quarterback Justin Temple injured his left foot after being tackled by a host of Lions on a QB keeper.

“I heard something crack,” Temple said as he was assisted to the sidelines.

Temple left the scrimmage to go receive X-Rays after being looked at by the team’s trainer.  The X-Rays revealed two broken bones that will sideline the quarterback up to four weeks, PennLive.com learned on Friday morning.

Buffaloes head coach Todd Rothermel was not forthcoming when addressing the injury post-scrimmage.

“I can’t talk about that,” Rothermel said when asked about Temple’s injury on Thursday.  “It will be next guy in—we’ll have to work on our next quarterback.”

That “next guy” will be either sophomore Trevan Dorman or freshman Noah Heimbaugh, Newport’s two reserve quarterbacks.  The young gun-slingers are expected to compete to win the interim starting gig while Temple sits out the first few games of the season.

The Buffaloes’ first game will be played against the Susquenita Blackhawks on Friday (Aug. 30) at George Katchmer in Newport at 7 p.m.  The first of four games Newport will have to play without Temple, the Perry County rival Blackhawks will be tough, especially with Temple sidelined.

After Susquenita, Newport will travel to play Pine Grove on the road, host Tri-Valley at home, and then take on Juniata on the road.  Temple is expected to return in time for the team’s Week 5 match against Line Mountain at home, if not sooner.

"I'll be alright," Temple tweeted from his Twitter account, @J_Temp91, on Friday morning.  "Hopefully I'll be back by Week 4, that's what the doctor said."

Prior to his injury, Temple was looking greatly improved going into his second season as the team's starter.

A duel-sport athlete, Temple was selected to play in the Central Pennsylvania Interscholastic Hockey League all-star game in January.  Last fall, Temple passed for 975 yards and eight touchdowns as a junior and added 462 rushing yards and six more scores on the ground.

Newport will have to start the season without him, but Temple will be back and motivated to finish off the year on a strong note.  Temple’s down, but don’t count him out.
Author Jon Heath at 1:06 PM
Email ThisBlogThis!Share to TwitterShare to FacebookShare to Pinterest
Tags: Buffaloes, Football, High School Football, Justin Temple, Newport, Noah Meimbaugh, PennLive, Perry County, Susquenita Blackhawks, Todd Rothermel, Trevan Dorman
Newer Post Older Post Home