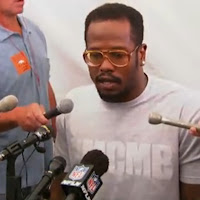 On Monday, news broke that Denver Broncos star outside linebacker Von Miller is facing a four-game suspension for breaking the league's substance-abuse policy.

Miller is going to appeal the suspension and has maintained that he did "nothing wrong," and he is being supported by the NFL Players Association.  For his part, coach John Fox said on Wednesday that Miller will not face punishment from the team and will practice with the first-team defense until the Broncos "hear something differently."

"We're focused on the task at hand," added Miller.


Miller emphasized that he could not candidly comment on the situation until it is resolved.  It is expected to be "resolved" by September, when the league will either comply with Miller's appeal or enforce his suspension.

Once a decision has been made, details on as to why Miller was suspended will probably come out.  According to the NFLPA, he was not suspended for PEDs, which raises suspicion that he may have been docked for recreational drugs.

Miller will join his teammates at practice tomorrow morning when the team kicks off training camp practices.  Until a decision is made by the league's front office, it will be business as usual at Dove Valley.
Author Jon Heath at 5:23 PM
Email ThisBlogThis!Share to TwitterShare to FacebookShare to Pinterest
Tags: Denver Broncos, John Fox, NFL, NFL Offseason, PEDs, Suspensions, Training Camp, Video, Videos, Von Miller
Newer Post Older Post Home