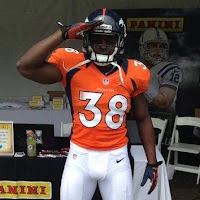 In April, the Denver Broncos selected record-breaking Wisconsin running back Montee Ball in the second round (58th overall) of the 2013 NFL draft.

In Denver, Ball is expected to contribute early and often and perhaps eventually win the starting job away from incumbent veteran Willis McGahee.  But before he hit the practice field, Ball had to choose a jersey number.

Ball wore No. 28 as a Badger, but that number currently belongs to safety Quinton Carter.  So how did Ball end up with No. 38?

"I came in like the day after they drafted me and talked to the equipment guy (Chris Valenti) and he gave me a list of numbers that I could chose and it was 37 to 49," Ball told Reggie Rivers in a recent interview on CBS4 Denver.

Anderson was drafted in the sixth round (189th overall) in the 2000 NFL draft by the Broncos. He would go on to rush for 1,487 yards and 15 touchdowns as a rookie before injuries slowed down his production following his breakout season.

Anderson's final season with the Broncos came in 2005 when he rushed for 1,014 yards and 12 touchdowns before joining the Baltimore Ravens the following offseason and retiring a year later in 2007.  Before joining the NFL, Anderson spent four years in the United States Marine Corps upon completing high school.

"I remember (Anderson), I played with him in video games and stuff like that," concluded Ball.

Hat tip to IAOFM.com for the link to the interview with Ball.
Author Jon Heath at 5:23 PM
Email ThisBlogThis!Share to TwitterShare to FacebookShare to Pinterest
Newer Post Older Post Home