Report: USMNT will host Brazil in friendly at Gillette Stadium in Sept 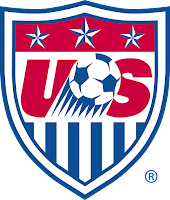 The U.S. men's national soccer team will host Brazil in friendly at Gillette Stadium on September 8, according to a report from the Boston Globe.

The game will be confirmed soon, according to the Globe's report.

A spokesperson for U.S. Soccer declined to comment on the report, according to prosoccertalk.com.

Though they have never really been competitive with Brazil, U.S. soccer has recently gained more respect. The women's team defeated Japan 5-2 in this year's women's World Cup, and the men's team advanced to the Round of 16 in the 2014 World Cup.

The USMNT also just advanced to the quarterfinals of the 2015 CONCACAF Gold Cup two years removed from winning the tournament in 2013.

The U.S. is improving on the pitch, and they'll get a chance to prove it against one of the top teams in the world in September.
Author Jon Heath at 8:22 PM
Email ThisBlogThis!Share to TwitterShare to FacebookShare to Pinterest
Tags: Brazil, CONCACAF Gold Cup, Football, Friendly, Gillette Stadium, Gold Cup, Soccer, USMNT, Women's World Cup, World Cup
Newer Post Older Post Home