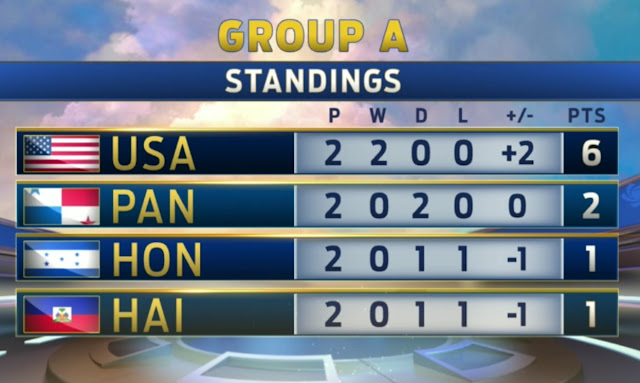 The United State's Men's National Team defeated Haiti 1-0 in their second match of the 2015 CONCACAF Gold Cup Friday evening. The win helped the U.S. clinch their group, automatically advancing them to the quarterfinals.

Forward Clint Dempsey scored in the 47th minute. Dempsey now has three goals through two games in the tournament.

The win marked the U.S.'s 50th all-time Gold Cup victory. The game, played at Gillette Stadium, boasted an attendance of 46,720.

The U.S.'s next game will be played against Panama on Monday, July 13. Kickoff is scheduled for 9:30 p.m. ET, and the game will be broadcast on FOX Sports 1 (it will also be streamed on the FOX Sports Go app).

After playing Panama, the USMNT will play in the quarterfinals on July 18 in Baltimore. This year's final will be played on Sunday, July 26 at Lincoln Financial Field.
Author Jon Heath at 7:55 PM

This site is not affiliated with or necessarily endorsed by the Denver Broncos or the NFL.