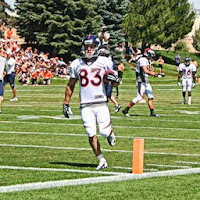 Going into last weekend's game, Denver Broncos wide receiver Wes Welker had caught eight touchdowns through six weeks, tying a franchise record for the most consecutive games with a touchdown catch. In Sunday's 39-33 loss to the Indianapolis Colts, Welker caught seven passes for 96 yards but was held scoreless, thus ending his streak.

Though his scoring streak has snapped, Welker is still on pace to catch 99 passes for 1,083 yards and 18 touchdowns this season. If those are not Pro Bowl worthy numbers, nothing is.

To help Welker earn his sixth Pro Bowl selection, I have teamed up with Procter & Gamble and Old Spice to help generate votes for Welker on the ballot. Though all Broncos fans certainly hope Welker is ineligible to play in the Pro Bowl while preparing to play in Super Bowl XLVIII, there's no denying that the players appreciate the honor of being selected to represent their teams in Hawaii.