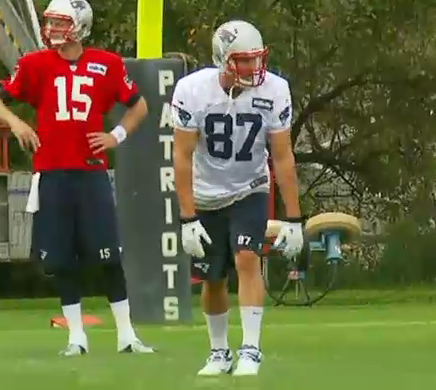 The 2013 NFL season will kickoff tomorrow night when the Denver Broncos host the Baltimore Ravens at home on NBC (8:30 ET).  Here's a spin around the NFL as Week 1 approaches:

The New England Patriots expect to have star tight end Rob Gronkowski back in time for their Week 3 match against the Tampa Bay Buccaneers.  Gronkowski has been practicing all week, but will not be able to play in New England's season opener against the Buffalo Bills on Sunday.

Gronkowski is a "long shot" to play in Week 2 against the New York Jets, but he is expected to be back against Tampa Bay, according to the Boston Herald.  The Patriots will host the Broncos in Week 12 on Sunday Night Football.

The Oakland Raiders will start second-year quarterback Terrell Pryor in their Week 1 match up against the Indianapolis Colts on Sunday afternoon.  Pryor started in one game as a rookie last season, throwing for 155 yards, two scores and an interception while adding 51 rushing yards and another score on the ground.

The Buffalo Bills will also be starting a young quarterback this weekend—rookie E.J. Manuel will get the nod against New England.  Manuel was the first quarterback taken in April's draft, going off the board 16th overall out of Florida State.