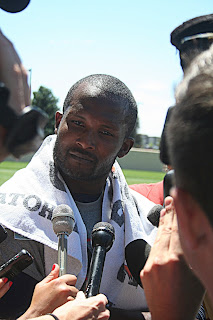 The Denver Broncos will be without star cornerback Champ Bailey tomorrow night in the NFL's 2013 season opener, Mike Klis of the Denver Post first reported (via MHR).

Bailey (foot) has not participated in practice all week and has missed most of the preseason.  In Bailey's absence, Dominique Rodgers-Cromartie will start at cornerback, likely across from Tony Carter with Chris Harris Jr. providing coverage in the slot in nickel packages.

Even without Bailey, the Broncos are currently 7.5-point favorites over the Baltimore Ravens.  The game will mark the first time the two teams have faced off since Baltimore knocked the Broncos out of the 2012 playoffs earlier this year.