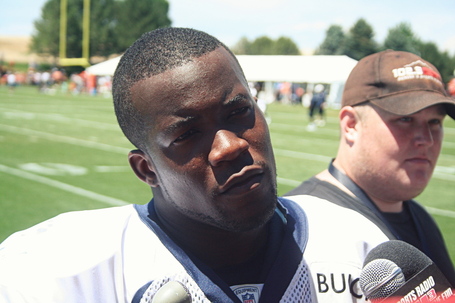 On Day 13 (19 including non-practice days) of training camp, the Denver Broncos hit the field with enthusiasm—specifically running back Knowshon Moreno, who came out of the locker room singing, again.

Moreno is part of a three-way running back competition between himself and youngsters Ronnie Hillman and Montee Ball. None of the three RBs have been able to create much separation in the competition, but Hillman is currently listed as the team's starter.


"Ronnie did a great job," offensive coordinator Adam Gase said when asked about the running back's Week 1 preseason performance after practice on Saturday. "It was good to see him get out there and do his thing. And then Montee, same thing. I think he got outside one time. It was good to see him just stick his foot in the ground and get vertical."

Gase had only good things to say of both Hillman and Ball and also gave kudos to Moreno.

"Those two guys are doing a good job, as far as trying to execute what we want them to do. They’re good in pass (blocking), and Knowshon had a tough pickup in the formation we were in. He did a good job of stepping up and trying to take the heat off of Brock Osweiler a little bit."

As of now, there is no clear front-runner in the running back competition. But that's only one of the many story lines we've been following at camp.

"No real update on the injuries, other than Ryan Clady was limited at today. He is easing back into it," head coach John Fox said after practice.

Safety Quinton Carter, wide receiver Greg Orton, tight ends Joel Dreessen and Jacob Tamme and cornerback Tony Carter were held out of practice due to injuries. Wide receiver Wes Welker also did not participate, but Fox indicated after practice that it was non-injury related.

Clady and fellow offensive tackle Orlando Franklin were both back on the practice field, with Clady participating only on a limited basis.


The most encouraging part of practice came when cornerback Dominique Rodgers-Cromartie, who suffered a high ankle sprain last month, returned to the field in full pads.

"We are easing him back into it," Fox said of DRC's return, adding that the cornerback participated during individual drills.

"It felt real good just to get out there and do a little bit of running around and just working my way back in," added DRC.

During team drills, cornerback Omar Bolden played across from Champ Bailey. Rodgers-Cromartie did not participate in team drills and Carter was sidelined, giving Bolden an opportunity to run with the first-team defense as Chris Harris Jr. played in the slot.


Center J.D. Walton was present at practice wearing a cast on his ankle, but he was able to walk around on his own. Even more encouraging was offensive guard Chris Kuper working with tight end Jacob Tamme on the far field.

Both Kuper and Tamme were actively moving around, with Kuper appearing all but ready to return to the field. That's only speculation, as the team has not yet cleared Kuper to return to practice.


Running back Jeremiah Johnson, who is battling a toe injury, did not participate in practice and was limping around gingerly. With rookie C.J. Anderson showing flashes of brilliance and Lance Ball giving the team special team's value, Johnson's chances of making the team seem to be dwindling.

If he does not make the active roster, Johnson cannot join the practice squad, either, as he has run out of P.S. eligibility. Anderson, on the other hand, is P.S. eligible, giving him an upper hand in the competition. 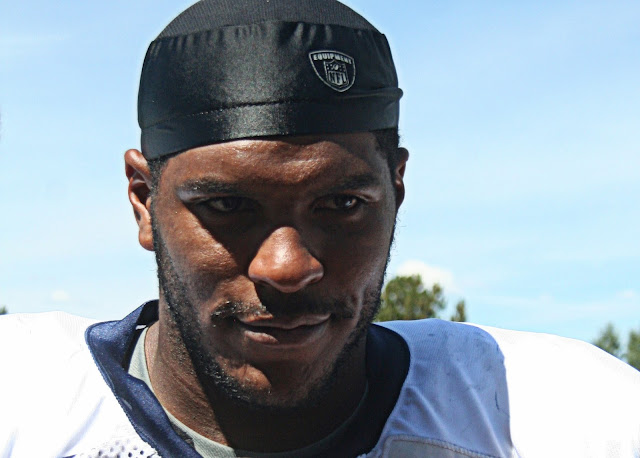 Another day, another strong showing for tight end Julius Thomas. With Dreessen and Tamme still sidelined, Thomas continued to run with the first-team offense and looked smooth.

"The guy has got a lot of talent. And we’re going to keep bringing him along, and give him as many reps as possible," Gase said of Thomas after practice.

Thomas caught a touchdown pass during red zone drills and continues to provide quarterback Peyton Manning a large target. Watch for Thomas to remain one of Manning's top red zone targets going into the regular season.


After a strong performance on Thursday against the San Francisco 49ers, second-year safety Duke Ihenacho ran with the first-team defense. Rotating in behind Ihenacho and Rahim Moore was Mike Adams and David Bruton.

The odd man out was Quentin Jammer, understandably so.

Jammer played with the third-team defense at safety and looked slow and sluggish. His reaction time was poor, and he looked unnatural as a safety (probably because he's been a corner for the past eleven years).

As of now, Jammer appears a long shot to make the final roster.


While Jammer's stock is falling, Ihenacho and Moore are rising. Moore impressed on Saturday, snatching a high, errant Manning pass out of the sky during team drills. Ihenacho was, as he has been all camp, aggressive in team drills.

"Duke had a good first outing. He was part of a group of players that played well and I am happy to see that," defensive coordinator Jack Del Rio said of Duke's preseason performance after practice.

With more experience than Ihenacho, Adams may be the team's Week 1 starter at free safety. But the Broncos are poised to eventually have two young and promising safeties—Duke, 24, and Moore, 23—starting in the secondary this fall. 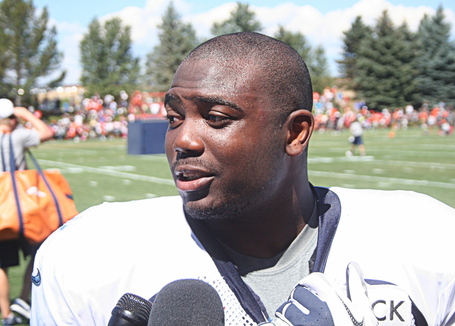 One of the biggest stories from Thursday's victory over San Francisco, rookie running back C.J. Anderson has drawn a lot of praise from both fans and pundits. Some on the Denver airways have even suggested running Anderson with the first- or second-team offense next week to get a better look at him.

Gase shot down such a notion after practice.

"We’re bringing him along," Gase said on Saturday. "(He's) a younger guy that was an undrafted free agent—you can’t just throw him right in with what's going on with the ones. It's a process for him, and I think he's trying to get caught up to speed as quickly as possible."

Miscellaneous notes: The chances of Mike Adams making the final roster may not be as slim as they once appeared earlier this offseason. Adams complimented his one interception performance from Thursday with another interception at practice today. Adams is a likely candidate to be kept around as a veteran presence... Demaryius Thomas is a beast... Gerell Robinson is a prime candidate to land on the practice squad... rookie quarterback Zac Dysert had a rough practice, missing several passes throughout the morning... with Tony Carter sidelined, Omar Bolden stepped up to return punts behind Trindon Holliday and Eric Decker.

The team will hold a walk through practice tonight that will be closed to the public and have off today. Denver will return to the practice field at 10:25 a.m. on Monday (full schedule).

This post is sponsored by TiqIQ.  Find the best deals on NFL tickets at TiqIQ.com!