Twitter Reacts to Peyton Manning On Stage with Kenny Chesney 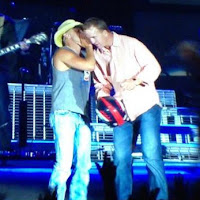 Denver Broncos quarterback Peyton Manning came on stage to participate in Chesney's "Boys of Fall" spot, as he did at last year's concert at SAF@MH.

Peyton Manning on stage at the Kenny Chesney concert for "Boys of Summer". pic.twitter.com/wyOSIH0Ll4
— The Orange Page (@theorangepage) July 21, 2013

Manning took the time to sign a helmet and give it to a young fan, per Nashville Becca.

Chesney's popular "Boys of Fall" music video can be seen after the jump.

Manning's appearance was apparently well-received by the male fans in attendance.

when peyton manning came on stage, i'd never seen so many guys screaming and fangirling at once. it was somewhat terrifying, but hilarious.
— Mary Kate (@marykatexoo) July 21, 2013

Not surprisingly, Manning's presence was well-received all around.

When Peyton Manning came on the stage for Boys Of Fall. That might be as loud as I've ever heard it there #NoShoesNation
— Eddie Schroder (@TheReal_EddieS) July 21, 2013

Chesney, of course, is a buddy of Manning's and the duo share Tennessee connections (Chesney was born there and Manning played at the University of Tennessee).

Peyton Manning came out when Kenny Chesney played Boys Of Fall Tonight. They bro'd out so hard that I almost cried.
— TK (@TaylorKellyUT) July 21, 2013

Kristen Nelson was just one of many who tweeted near-heart attack experiences from the night.

As I'm leaving the show tonight, I walk past a fenced off area for VIP's and I see Peyton Manning. Nearly had a heart attack.
— Kristen Nelson (@K10Roaming) July 21, 2013

From the looks of those tweets, it sounds like it was a successful night.  There have been no reports of major field damage from the concert, although that was a concern.

The Broncos will hold a team scrimmage at the stadium on Saturday, August 3, which will be free and open to the public.  It will mark the first time this year that the team practices in-stadium in preparation for the 2013 season.
Author Jon Heath at 11:21 AM
Email ThisBlogThis!Share to TwitterShare to FacebookShare to Pinterest
Tags: Concert, Denver Broncos, Kenny Chesney, No Shoes Nation, Peyton Manning, Sports Authority Filed at Mile High
Newer Post Older Post Home