Peyton Manning's No. 18 the 5th-Best-Selling Jersey in the NFL 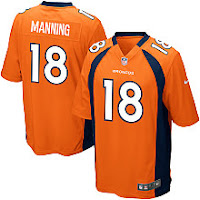 After training camp sales and pre-season hype, Manning will likely climb the rankings again, perhaps getting back into the top three during the regular season.  Be advised, however, that NIKE appears to be preparing to tweak Denver's uniform.