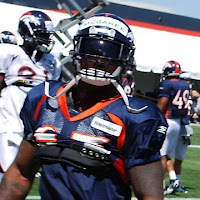 The Denver Broncos wrapped up organized team activities (OTAs) last week and will begin mandatory minicamp practice sessions on Tuesday as a final tune-up before training camp starts up in late July.

McGahee, 31, is working out in Miami with former college teammates as he has done this time of year throughout his career.

Because everything is technically voluntary at this point in the offseason, neither of the two players created big waves by not reporting to Dove Valley during OTAs.  But when minicamp begins on June 13, it will be a different story.

McGahee is expected to show for camp as he did last summer, in fine physical condition.  Clady, on the other hand, could potentially hold out into training camp if he does not receive a contract offer greater than the one-year $9.8 million franchise tag he has refused to sign.

While holding out may ultimately result in a larger salary, it would also put a small hole in Clady's wallet.  Last summer, Jacksonville Jaguars running back Maurice Jones-Drew skipped minicamp and was fined over $60,000.  Clady will presumably receive similar fines if he does not report to camp next week.

Update:  Because Clady is not under contract, he may not be subject to attendance fines.

@jhsmden But Clady, unlike McGahee who has contract, hasnt signed his tender & therefore not under contract subject to mandatory camp?
— Ron (@ronNcaphill) June 7, 2013

The sooner Clady and McGahee report to camp, the sooner the offense can begin establishing a rhythm as a collective unit.  In the meantime, younger players will get a chance to prove themselves when thrust into the first-team lineup at practice.
Author Jon Heath at 11:42 PM
Email ThisBlogThis!Share to TwitterShare to FacebookShare to Pinterest
Newer Post Older Post Home