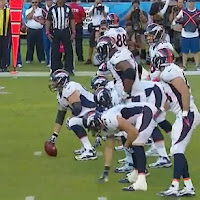 On Thursday, the Denver Broncos agreed to terms with center Dan Koppen (6'2", 300 pounds), team executive John Elway announced.  Terms of the contract are unknown, but it was likely a one-year deal.

Center became a position of need for the Broncos when starting center J.D. Walton underwent surgery on his left ankle earlier this week.  Walton is expected to be placed on the PUP (physically unable to perform) list, which will keep him out of Denver's first six games of the 2013 season.

In Walton's absence, Koppen is expected to start again as he did when Walton went down in Week 4 of last season.  Koppen started in the final 12 games of 2012, allowing just one sack during his time with the team.

As IAOFM.com noted, Koppen's (presumed) one-year deal will be worth $940,000 if he was signed at the veteran minimum, as he did last season.  By the time the regular season rolls around in September, Koppen will be 34 (for comparison, consider that long-time Indianapolis Colts center Jeff Saturday played until he was 37).

Originally drafted by the New England Patriots in the fifth round (164th overall) of the 2003 NFL Draft, Koppen went on earn a Pro Bowl selection in 2007 and win a pair of Super Bowls as quarterback Tom Brady's center from 2003-2011.  With a .794 career regular-season winning percentage, Koppen returns to Denver with 132 career starts under his belt.

The Broncos will likely have a "center competition" at training camp this summer, but until Walton returns to full health, center will be Koppen's job to lose.
Author Jon Heath at 5:18 PM
Email ThisBlogThis!Share to TwitterShare to FacebookShare to Pinterest
Newer Post Older Post Home