A Dr. Seuss Take on the Tim Tebow Situation 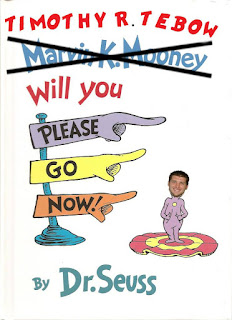 This is all relevant, of course, because Tebow used to be a Denver Bronco.  Some seem to have forgotten it, but Tebow actually entered the NFL with Denver.

Whether fans like it or not, Tebow will always be linked to the Broncos and will remain relevant (at least to some extent) in the Broncos blogosphere until he hangs up his cleats for good.  He will still be talked about long after he is done in the NFL—for his performances and perhaps more notably, for his polarizing stances on social issues.

With all that said, there are some that have had enough.

The photo to the right was created by a Dr. Seuss page and sums up the stance taken by a majority of Broncos fans.  Tebow did some great things for the Broncos, but that was in the past.

With this, we wish Tebow the best and officially move on.  It's safe to say, this is Peyton Manning's show now, and nobody can logically argue that it shouldn't be.
Author Jon Heath at 7:49 PM
Email ThisBlogThis!Share to TwitterShare to FacebookShare to Pinterest
Newer Post Older Post Home