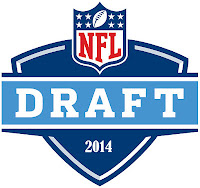 Moving forward, the NFL draft will take place in May (instead of in April) and the league year will begin before the Indianapolis scouting combine, according to ESPN.com's Adam Schefter.

As Schefter notes, the 2014 NFL draft will take place from May 15-17.  The league year would begin before the combine starting in 2015.

Schefter also noted on Monday that cornerback Charles Woodson is "intrigued" by the possibility of finishing his career with the Oakland Raiders, the same place where he began his career.  But Woodson, of course, may still pick Denver.