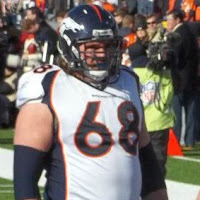 "It's been an unforgettable seven years.  I am looking forward to this next chapter of my career."


Despite his gratitude  Dumervil's departure was not received well by many fans.

"Sad to see him go, but he's a traitor. I hope his career goes all downhill from here," one fan commented on BroncoTalk's Facebook page—one of the more mild comments sent Dumervil's way via social media.

“I can say I learned a lot from (Dumervil), a true friend and teammate,"  outside linebacker Wesley Woodyard tweeted on Sunday evening.  "Wish you nothing but success, bro!"

"I don't understand the ill will toward Elvis," tweeted offensive guard Zane Beadles.  "He is a great teammate, I wish him the best!"

Fans may be upset at Dumervil, but no player should receive flak for making a move he feels is for his best interest.

"Understanding the business of football is tough," continued Beadles, who is entering his his fourth season with the team.

Just as teams release players to create more cap room and as an every day business man accepts a higher-paying gig from a competing business firm, free agent athletes have the right to chose their employer—it's a business for them too.

Dumervil's teammates understand his decision; it may take a little longer for the fans to accept it.