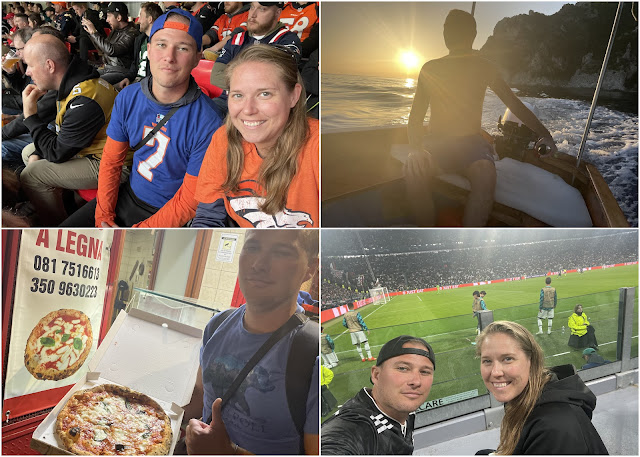 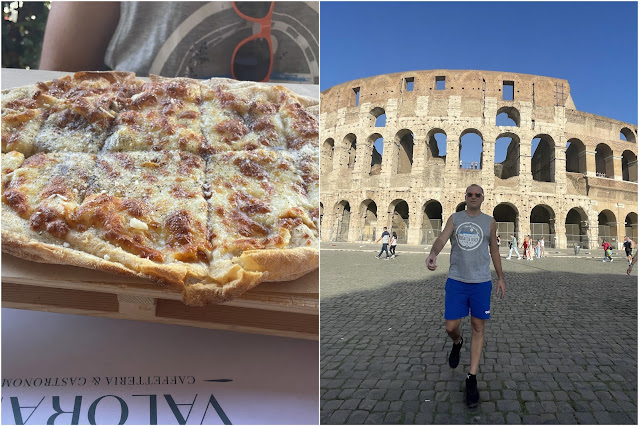 After our stay on Mallora, we took a $9.61 flight back to Barcelona and then flew from there to Roma (Roma), Italy (Italia) for $52. We toured the Roman Forum (Forum Romanum) and the Colosseum and the Mamertine prison where Peter and Paul were held in a dungeon. Italy is, of course, known for pizza, but don't get Italy's famous Neapolitan pizza in Rome -- make sure you get the authentic Roman pizza experience with rectangle-shaped pizza (pizza al taglio). We enjoyed a delicious white pizza.
Day 6: Malta
After a day trip to Rome, we flew to Malta to check out the famous Blue Lagoon. We took a ferry from the mainland to the lagoon's mini harbor and we went at the perfect time of day -- first thing in the morning. The lagoon is beautiful, but around midday, it turns into a bit of a tourist trap and becomes extremely crowded, even after the peak summer months.
We got there early and beat the crowds and found Tony's Blue Lagoon Lockers to store our bags. Tony was extremely nice and gave us a free small compartment to store our valuables after we bought spaces for our two large backpacks. We then hiked over to Saint Mary's Tower, which you will definitely recognize if you've seen The Count of Monte Cristo. It cost just 2€ to enter the castle and it's worth it for the view from the top alone.
We then went back down to the lagoon area and it was already starting to get crowded, so we swam across the lagoon to a tiny island that was full of caves and rock arches. We swam through one of the openings and discovered beautiful green water on the other side (check out our Malta adventures beginning at the 5:46 mark of this video).
Before the trip, I bought a pair of swim shorts that were on sale on Swimoutlet.com. You can get 20% off your first purchase by using my Swimoutlet.com referral link.
Day 7: London
From Malta we flew to Milan (Milano), where we stayed overnight before an early-morning flight to England for the Broncos game. We were able to fly from Milan to London for just $13 (check out WayAway). We saw all the big London sights before heading over to the NFL game -- Big Ben, the London Bridge, the more-impressive Tower Bridge, Westminster Abbey and, of course, Buckingham Palace.
We then took a "tube" over to Wembley Stadium to watch the Broncos face the Jaguars with more than 86,000 fans in attendance. We were able to buy tickets for the game directly through the NFL, but you can find NFL London tickets on resale sites such as Viagogo.
After the Broncos game, we flew back to Milan for another overnight stay before an early-morning $20 flight to Naples (Napoli).
Day 8: Italy 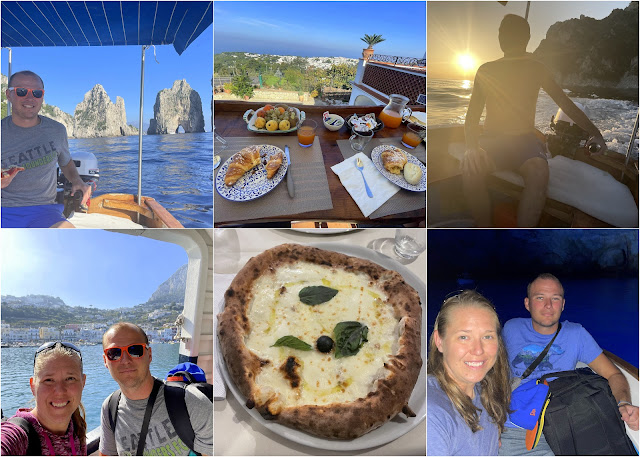 We got a $20 flight from Milan to Naples (Napoli), where I was especially excited to visit because I am passionate about pizza. I love Neapolitan pizza, so much so that I have my own Ooni pizza oven, and I was so excited to try authentic pizza in Napoli.
You don't want to go to a fancy sit-down restaurant to find the best pizza in Italy. Instead, you will find cheaper (usually about 6€) and often better pizza at small, hole-in-the-wall pizza shops throughout Napoli. We found Ammore Pizzareia and loved it (check out their pizza-making process at the 9:12 mark of this video).
From Napoli, we took a ferry to Capri, which is a small but beautiful island. We then made our way to Anacapri on the island and stayed at B&B Il Grappolo, a beautiful private home with a balcony overlooking the ocean outside our room (11:21). Maria was an absolutely wonderful host and though we don't speak Italian, we were able to communicate through hand gestures and Google translate on our phones.
Maria provided a wonderful breakfast (seen at the 11:29 mark in this video) and we really enjoyed our stay at her bed and breakfast. I'd love to return to Capri and if I do, I'd stay at B&B Il Grappolo again.
From the B&B, we made our way to Marina Piccola, where we had booked a rental from Capri Blue Boats online before the trip. We rented a "Lance Capresi" boat (without a skipper) that did not require a license. We rented for four hours, which was plenty of time to check out all of the famous rock arches (notably the Faraglioni) and we even anchored and went for a swim through a cave.
We probably would have been fine with a two-hour rental, but we didn't want to feel rushed. You can check out our Capri Blue Boats experience beginning at the 9:37 mark of this video. I'd definitely do it again, their service was great. They provided a cooler with ice and there's a pizza shop right next store to the boat rental so we were able to bring two pies with us.
We also took a short tour of the Blue Grotto, which is a must-visit if you're on the island.
We stayed in a beautiful, quaint town in Anacapri that seemed nearly unnoticed by tourists, at least when we visited in late October. Still in the Campania region with Neapolitan pizza, we found a delicious restaurant close to our B&B that had the best pizza I've ever eaten. The water, sights, boats, people and food made Capri one of my favorite stops on the trip.
Day 9: Italy 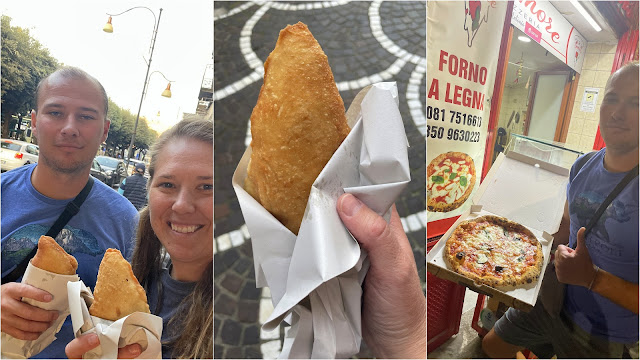 After our wonderful stay on Capri, we headed back to the mainland and traveled to Pompeii, an amazingly-preserved ancient Roman city that was buried in volcanic ash around 79 AD. While there we tried fried pizza -- "pizze fritte" (which looks like a small fried calzone) -- and it was absolutely amazing. I can't wait to make it myself at home.
We then flew to Venice (Venezia), where we stayed overnight.
Day 10: Italy 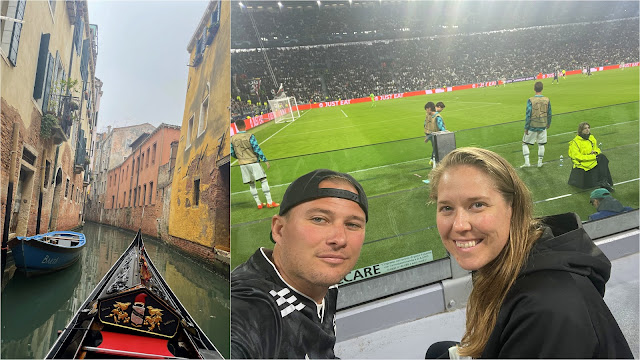 We took a train to Venezia from the mainland and then went on a 30-minute gondola ride before getting more pizze fritte and then took a train to Milan, where we then switched trains to get to Turin (Turino). We purchased tickets to watch Juventus play Paris Saint-Germain in a Champions League game about a month earlier hoping to see the USMNT's Weston McKennie playing for Juve. McKennie was unfortunately injured for the match, but it was a pretty nice consolation to see Lionel Messi and Kylian Mbappé playing for PSG in person!
We became Juve members to be able to purchase tickets during the member sale (and we landed front-row seats!), but you can find secondary market tickets on resale sites like Viagogo.
We tried pizza on our way to Allianz Stadium, but that was a bad idea. Northern Italy is not known for its pizza the same way the Campania region is, and we found that out the hard way! Oh well, the soccer game was great!
Day 11: France 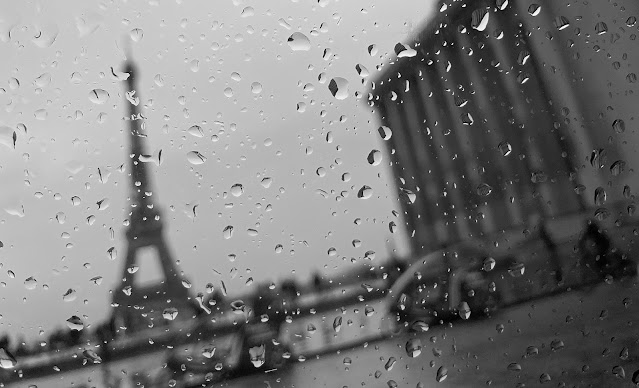 After watching Juve play PSG in Turin, we flew to Paris (Pariz) to check out the Eiffel Tower and we ate delicious crepes, baguettes and croissants. We then took our $192.87 flight back to the USA that evening.
A few lessons learned from the trip: We booked a bunch of budget flights, including the flights to get there and back. Because of that, none of the flights we took allowed for more than a single carry-on bag (without additional fees). That was fine for us because we only took backpacks, but even our backpacks were over the weight limit a few times, but they were never checked because airlines were primarily checking passengers with more than just one carry-on.
Speaking of our bags, ours weighed about 26 pounds each. Toward the end of the trip, they did start to get a little heavy, but there were times when we were able to either leave them in the hotel room or check them in a locker. Traveling with backpacks was convenient and cost-effective, but just be mindful of how much weight you're taking if you go that route.
Our trip was an absolute blast and I'm so glad that we were able to do everything that we experienced, but we did run ourselves into the ground a little bit. We had multiple late-night arrivals at a hotel that was followed up by an early-morning flight. That can work once or twice a trip but doing it three nights in a row was a little too much. Now we know for next time!
With such a busy schedule, we also had a lot of breakfast and lunch meals at airports. That wasn't too bad, though, because there was a lot of good food (we love fresh mozzarella and tomato sandwiches), and it allowed us to maximize our time and see a lot of sites.
Finally, one lesson that I already mentioned -- don't jump off a cliff into the ocean. It's just not worth the risk of something going wrong. Fortunately I was recovered after about a month, but others have suffered worse injuries.
Overall, it was an extremely memorable budget vacation, and I'd love to go back to several of the places we visited. You can check out the full video recap of our trip below:
Thank you for clicking the links on my website! I can earn small commissions when readers purchase services and products through the referral links on my blog. flexoffers
Author Jon Heath at 5:00 AM
Email ThisBlogThis!Share to TwitterShare to FacebookShare to Pinterest
Tags: Barcelona, Blue Lagoon, Budget Travel, Dortmund, Europe Trip, France, Italy, Juventus, Mallorca, Malta, Naples, NFL, NFL London, Paris, Rome, Spain
Older Posts Home
Subscribe to: Posts (Atom)